.I don’t recall what started it, but today I got thinking on the topic of collaboration in game making. Although I’ve made some attempts at it, the two complete games I’ve made so far have been solo efforts. (I’m not forgetting all the people that made my games possible: Tool programmers, beta testers, voice actors and so on. I’m very grateful for what they’ve done. I couldn’t have done it without them, but I still count both Frasse and Rocket Duel as solo projects.)

My first attempt (in 2002) at making a game with the SLUDGE adventure game engine was a collaboration. 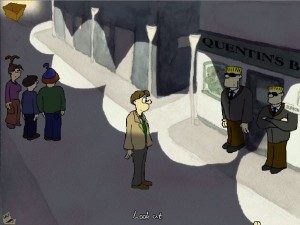 Mathias Ferguson, Crime Scene Photographer was designed by a man calling himself Ashikaga that I met in an adventure game forum (comp.sys.ibm.pc.games.adventure on Usenet). He was to design the game and I would implement it. We got a few scenes done, but in late 2003 Ashikaga found himself too busy and suggested we put the project on hold.

At this point, I started on Frasse (after looking around a bit for another collaborator without success). In 2006, after I’d released Frasse, I wanted to pick up development of Mathias again. Ashikaga was not only still busy with other stuff, but he’d also stopped playing adventure games, so he was not interested and instead gave me permission to do what I want with the game. (Even though we never got far with it, I still would like to pick it up again one day, maybe with another collaborator.)

I then made contact with Deirdra Kiai, asking if she would be interested in a collaboration after she was done with TGTTPOACS. When the reply came a few days later that the game was almost finished and she would indeed like to make a game with me I was thrilled. Not only am I a big fan of her games, we both had a track record of actually finishing games. Surely this time the collaboration would result in something great? We thought a while on what kind of game to make (a platform game? a kart racer?) and decided to try a small one-room conversation-based 3d adventure game. Deirdra would do the design and model the room, I would do character graphics and for the rest I don’t think we had a clear division. 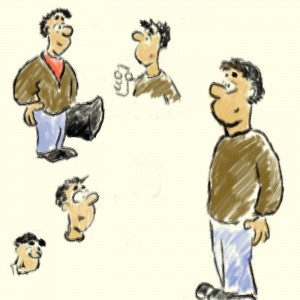 Character concept art for Bob, one of the main characters.

But as St. Edmond’s Second-Best Coffee hasn’t been released, it’s clear that something went wrong this time, too. 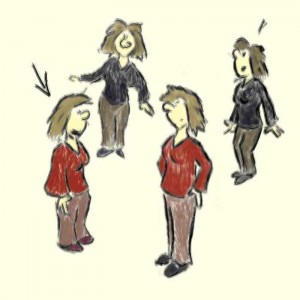 Concept art for Child of the Warriors, the other main character

Bob again. This time as a model in Blender.

As there didn’t exist any ready-to-use engines for 3d adventure games, we looked around a bit and decided on Ogre3d. Learning to use that wasn’t as easy as I’d hoped, and it was made even more complicated that I had bought my first Mac and I wanted to make it cross-platform. Trying to learn Mac-coding and Ogre3d at the same time was not the smartest thing I’ve ever done. Add to that the fact that Ogre3d wasn’t as well supported on Mac as on Windows, and you see what we were up against. We never got the engine to a state where we would be able to start making the actual game.

So the obvious failure here was that we bit off more than we could chew. Even though the scope of the game itself was deliberately small, the technical side of it turned out to be too hard for us. That was definitely the biggest reason for the death of the project.

But there’s more to it than that. The thing that broke the project was once again lack of time, but this time that lack of time was mine. A hobby has to take second place to paid work and other stuff, and when (after a long period of slowly making very little progress) I ended up unable to work at the game at all, the project died. (I don’t remember the exact details, but I think it was something like that.)

I also suspect that the vague work division was a bad thing.

(Deirdra then made Pigeons in the Park. It has some of the spirit of St. Edmond’s Second-Best Coffee even though it’s a different and smaller game, so play that game if you want a taste of what could have been.)

I’ve also played a smaller part in the creation of some games that actually have been made. I’m thinking of Handyman Wanted and 8 Squares in the Garden in particular, where I made the music. It was fun, but I’m not 100% happy with my contribution there. If I get to make music for someone else’s game again, I want to have more control over how it sounds in the game and not just mail some MP3 files to the game maker and then become surprised by how it actually sounds inside the game when it’s released.

I’m still hoping to be part of a collaboration in the future. Feel free to contact me if you have an idea.

3 thoughts on “On Game Making Collaborations”