Back in 2012, I wrote that I had started work on a new game, and that I was very excited about it. Since then I haven’t written anything here, and today I was asked for an update.

Sadly, I am not working on any game at the moment. The game musical I wrote about is on hold indefinitely, and it’s not due to my collaborators, it’s all my fault.

One part of it is lack of time. During most of the period when I made Frasse, I was working in a store. The upside of a job like that is that when you leave the place where you work, you leave it. You don’t have to give it a single though until you return. In addition, there were some tasks in that job (such as putting up groceries on the shelves) that left my brain free to do other things. In fact, I have some song ideas for the game written on bits of cardboard or coffee filters: 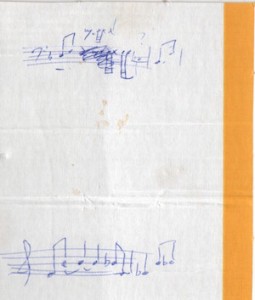 Song ideas on a bit of cardboard 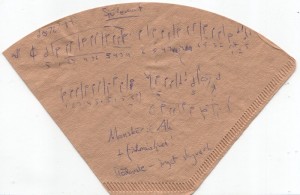 A song idea on a coffee filter

Today, I work as a teacher of wind instruments, which leaves no room for having things like that going on in the brain while working. So that’s one part of it.

But if I’m honest, that’s only a small part of it. I could find time for game making – I don’t have to work most Saturdays, for example. No, I think it’s more fair to say that it’s about motivation. Which is weird, because I enjoyed making Frasse quite a bit, and I really wanted to make that musical. Still do. I just seem unable to sit down and work on it (or anything else).

So at this time it seems unlikely that I’ll ever create another game (or anything, really), but who knows? Maybe things will change. I recently decided to not jump off a bridge in the near future, so I’m not giving up just yet.